How to buy cars in Mexico and import them to Germany

Need help to arrange Mexican export formalities? What about shipping and import to Germany?

Many questions, one answer: LPL Automotive

Based on a network of local specialists for export clearance and shipment we have added a new service to our range of products. In cooperation with our agents we take care of pick up, export clearance, shipping and import clearance. All services are from a single souce: LPL Automotive GmbH in Bremerhaven.

Our all inclusive package includes everything you need from door to door, from Mexico to Germany, Austria, Switzerland and many other countries in Europe including customs clearance.

SERVICE FOR YOUR CAR IMPORTS FROM MEXICO

Although we are able to arrange your imports through other ports like Rotterdam or Antwerp we still recommend Bremerhaven as it is a freeport.

NEW AND USED CARS FROM MEXICO

Besides Mexican classics like VW Beetle or T2, many new and used cars are likewise interesting for the German car market.

Buying new cars is easier. We arrange a contact to our local partner in Veracruz. He will be able to offer good cars for reasonable prices to you and will take care of the export to Bremerhaven.

If you should have more questions please contact us!

Basically, we offer our customers a trustee service. But Mexican car dealers and sellers do not always agree to a fiduciary payment.

In that case we offer our customers the exclusive opportunity to use our EUR transfer service. This is not a fiduciary service. Your money will be transferred through us to our agent in Veracruz. He will contact the seller and pick up the vehicle for payment of the purchase price.

An automobile import from Mexico can have a price advantage compared to vehicles in the German market for new and used vehicles. When importing a VW Beetle or T2, it is worthwhile in any case, also in relation to a later private investment.

As one of the leading car companies in Bremerhaven we have specialized in importing vehicles from Central and South America. So we not only support you with the local purchase in Mexico, but also take care of shipping and importing your car to Germany.

In cooperation with our local agents in Veracruz and Puebla we coordinate not only the purchase but also the car transport to the port of shipment Veracruz.

We also take over the export declaration for you. It includes e.g. the deregistration with the traffic office, notarial certifications and proofs for Mexican customs and tax offices.

Experienced specialists load the containers and roro ferries with the automobiles before embarking on the 25-day sea voyage to Europe.

Arriving in Bremerhaven we take over the unloading of the containers / ferries, as well as the customs declaration. After being released by the customs office, your vehicle will then be ready for collection. Alternatively, we offer car transports with weekly departures throughout Germany and Europe.

A once fewly appreciated insect drove out of the manufactures for the last time on July 30, 2003 in the Mexican city of Puebla. Only 3,000 copies of the final series were produced, the Última Edición.

Meanwhile, the VW Beetle is considered a worthwhile classic, not only in Mexico. Especially in Germany, demand is increasing amongst collectors and enthusiasts.

The VW Beetle from Mexican production is priced attractively compared to the native original, it costs only a fraction. In addition, many Mexican beetles are still first-hand owned.

Even in terms of spare parts, the "Mexican" can score points. Many components are identical, so firms in Germany provide the scene with original and rebuilt parts.

Until 1997, the legendary T2 from Volkswagen was produced in Puebla, Mexico, and together with the T1 from Brazil and Germany, makes the hearts of old-timer enthusiasts beat faster.

The advantages of a Mexican specimen are obvious, as many of these models are still in first hand and are waiting for their new owner.

Our cooperation partners are recognized motor vehicle companies that specialize in the refitting and approval of vintage and classic cars from South America.

For conventional car repair shops it is almost impossible to retrofit the car imports from Mexico professionally, get corresponding data sheets and show the vehicle later at the registration office so that an approval is guaranteed.

A technically perfect condition is the basis for retrofitting and subsequent approval. That's exactly what our regional partners specialize in.

You also have the option of preserving your vehicle with a cavity / underbody sealant.

Talk to us, we are happy to pass you on.

CUSTOMIZED OLDTIMER IMPORT FOR YOUR VEHICLE FROM MEXICO 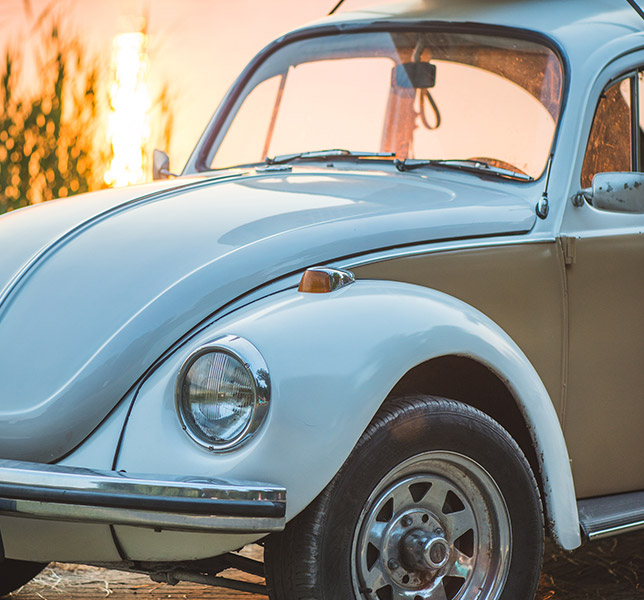 Oldtimer Import for 0% VAT instead of 10%

Vehicles over the age of 30 may under certain circumstances be imported duty-free into the EU under a special old-timer customs clearance. Only the obligatory 7% (instead of 19%) import sales tax is due. The vehicle must be at least 30 years old and in good original condition. Hot Rods and Replicas can therefore not be introduced at a discounted price. The decision as to whether a vehicle fulfills the requirements described above for a duty-free import of vintage cars is generally the responsibility of the European customs authorities.

Should it be necessary to dispose of R12 refrigerants, our own knowledgeable staff will do it, including certificate creation. So we are not dependent on external experts.